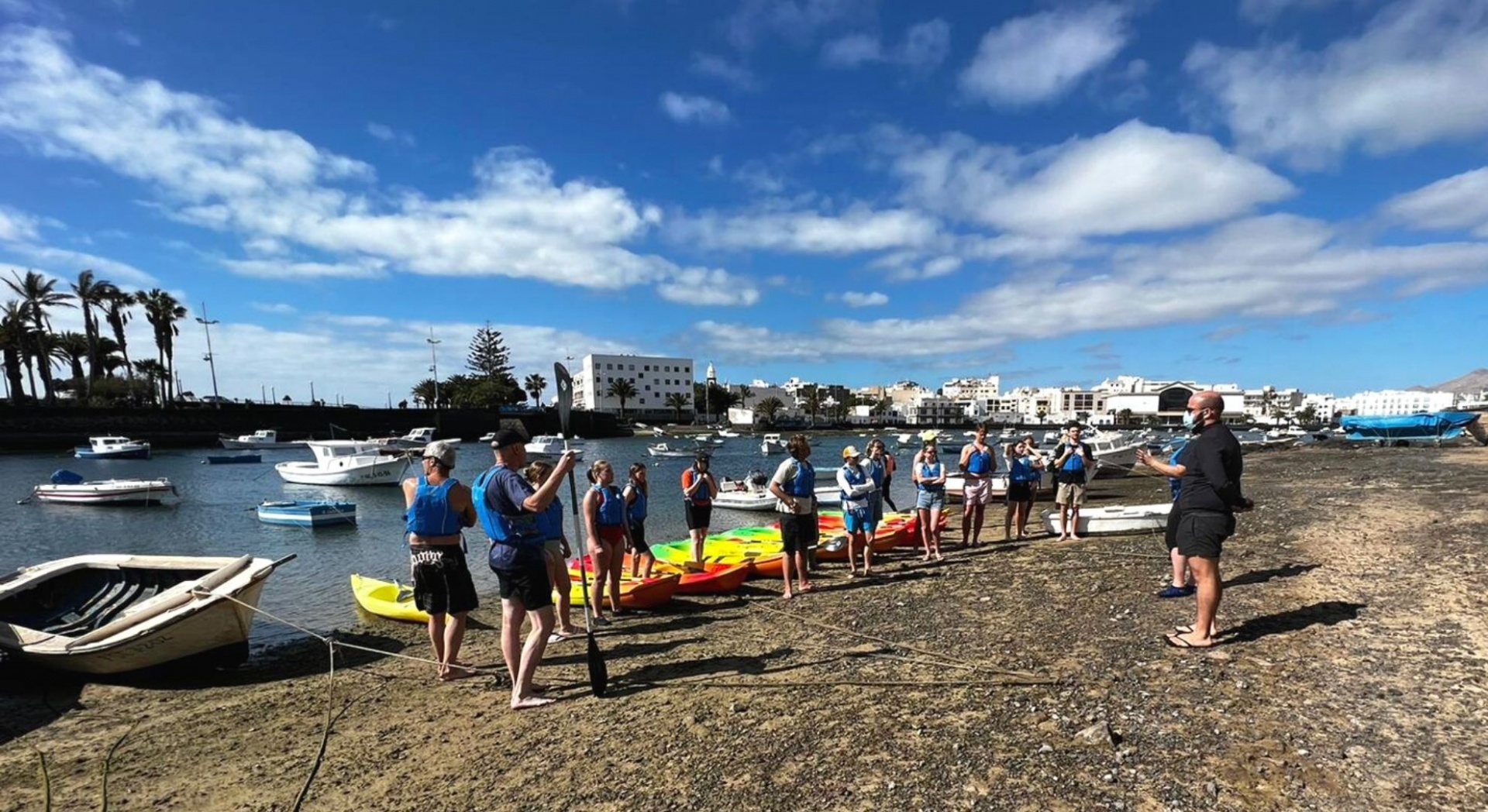 Tourism as it should be – exploring marine heritage

Arrecife's natural and cultural heritage, from a sea perspective

I recently had the pleasure of connecting a visiting group of Swedish marine biology students with a marvellous project being run by the Club de Piragüismo Los Marlines, a sea kayaking club in Arrecife, Lanzarote. The project seeks to create awareness amongst local citizens about their cultural and natural heritage from a maritime perspective, via guided kayak tours along the “Marina de Arrecife”. This is an attractive stretch of water in front of town, protected by volcanic reefs, creating a natural harbour and home to a rich and fascinating marine biodiversity.

The students were berthed in nearby Marina Lanzarote on board T/S Älva, an impressive 1939 schooner, their school during the trip. On previous annual visits, we had been lucky to receive an invitation by the Arrecife town council to study the nearby intertidal zone. Guided by a local expert, we had taken advantage of an early morning spring tide to observe and explore the extraordinary marine life that resides within this shallow volcanic crater. There, the rockpools came to life with an explosion of colour and form via sponges, stars, sea hares, sea slugs, eggs and even a juvenile angel shark.

After a safety brief, the group learned that the Charco San Ginés was formed from a shallow volcanic crater that opens out to sea where a series small islets are now connected by bridges and breakwaters. Having significantly reduced the flow of seawater into the lagoon, one of the consequences has been a higher nutrient content and declining oxygen levels. One of the first curiosities of the trip was the now famous Valonia balls: mini ecosystems comprising various species of algae, together with worms, sponges and crustaceans, which apparently clump together in what is believed to be an example of a nature’s own method of combatting water eutrophication.

Paddling out in front of the town, we were able to trace Arrecife’s history from port to capital  via its most emblematic features which include the Puente de las Bolas, Castillo de San Gabriel, Muelle de la Cebolla and the Fábrica de las Conservas (sardine canning factory), a story of commercial trading with visiting ships (orchilla (purple dye), ice plant (soap), cochineal, onions), colonialisation, and the rise and demise of sardine fishing and canning industry, where Arrecife was once the seat of one of the largest sardine fishing fleets in Europe. The work of local visionary César Manrique was discussed, as a driving force for what is now known as sustainable tourism and whose restored frescos can be viewed in the waterfront building that was originally the island's first hotel. A stop in front of the Islote de la Fermina provided the opportunity to discuss the key role of women during this intense period of the island’s commercial development.

The basalt substrate of this shallow and light-filled lagoon is filled with hollows and crevices, making it an ideal nursery for juvenile species. Another of the most relevant natural characteristics of the area is the presence of two protected species of seagrass (Zostera noltei and Cymodocea nodosa). A pertinent topic in terms of carbon sequestration, the students were fully aware of these plants’ multiple additional benefits, from mitigating seabed erosion to providing food and protection to marine fauna.

We took a moment to observe seabirds and discussed the importance of the area for nesting migratory birds, reflecting briefly on measures to ensure that nests remained undisturbed and passed by a buoyed area where a project from the University of Las Palmas involves planting seagrass in an attempt to stimulate regrowth.

José María García, the club president, shared why the club had been motivated to create the project:

"We are delighted to be able to make our "home" better known and more visible, as we spend many hours in the Marina of Arrecife and value it considerably. It's a pity that the great treasures of our island are so little known and appreciated. We are very grateful that the students from T/S Älva came to enjoy the experience and that they took away with them another view of Arrecife, as we believe that it is much better to see it from the sea. One of the objectives of the Project is to make all this information known, starting with the local public (even internally with the members of the club), but also reaching out to visitors to the island. At the Club we try to ensure that respect and affection for this area and its characteristics dervies from knowing and understanding it, as we believe that if you don't know what we have, you can't appreciate or value it".

Both enjoyable and culturally satisfying, this was a perfect example of a tourism that promotes learning, collaboration, respect for place and culture and above all, connecting with nature. Paddling gently in the warm sunshine in a historic space surrounded by marine life, together with a group of people who are enjoying themselves; surely this is what tourism should be.

Many thanks to José María (Pepe) from the Club de Piragüismo, to Juan Carlos of MJC Ambiental, and to Rut Hernández from the Arrecife Town Council for the recommendation.